When someone says “do not do this”, many are tempted to do the opposite. And that’s exactly what happened when user @IceUniverse tweeted about an image that reportedly could ruin your phone.

It was on May 21, 2020 that the user Ice Universe posted the mythical picture on Twitter.

“Warning!!! Never set this picture as wallpaper, especially for Samsung mobile phone users! It will cause your phone to crash! Don’t try it! If someone sends you this picture, please ignore it. ” 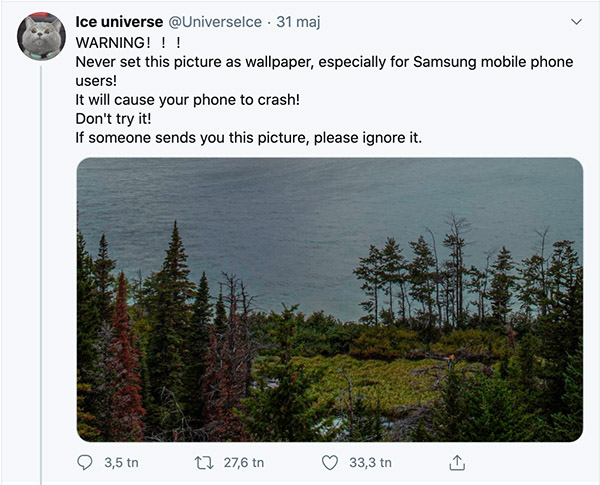 His post quickly spread on Twitter and, perhaps not entirely unexpectedly, the warning also had the opposite effect on many. The post received many responses, such as “Time to change background” and “Are you serious? I have to test this right away ”.

He told the truth

On May 31, the user tweeted again:

“This is not a joke, please do not try, I hope someone can understand its crash mechanism to avoid the harm of such wallpapers to the phone. Please developers to study it.”

To the great displeasure of many, the user Ice Universe spoke the truth. Over 2000 users answered that they had problems with their phone after downloading the wallpaper. People with versions of Android and Google phones seemed to be the ones affected by the destructive power of the image. This quickly became a mystery that many on the internet wanted to solve.

Many thought it was intentional

At first, people thought that this was an image that someone had deliberately manipulated, in order to destroy phones. But this was not the case. The image was a regular image, taken to be a wallpaper and had the correct resolution and size.

However, people who had taken a screenshot of the image did not get the problem. Even people who had downloaded the file from some social media could use the image without any problems. Therefore, many came to the conclusion that the problem lay in the image file itself and began to investigate it. They soon discovered that some social media reduces the image range and luminance in the image and that is why it could be used if you downloaded it from, for example, Weibo.

Problems with color and luminance

The problem was in the color profile, its scope is larger than what some phones can handle. The picture was taken in sRGB but then exported to ProPhoto RGB. Many social media do not handle that color profile and automatically converted the image back to sRGB, something that made the image look a little darker and flatter but also made the file harmless.

So it was a pitiful little pixel in the picture that has destroyed thousands of phones around the world. Thus, it was not that image itself that was haunted, but the problem could theoretically be recreated in other images. We can only hope that developers keep track of the problem and solve it, so we do not have to ruin our phones when we have to look at pictures of sunsets.

Soluno obtains Triple-A award for the 5th year in a row!

We're proud to announce that we have obtained the triple-A award for the 5th year in a row by the credit company Soliditet. What is Soliditet and Triple-A? Soliditet is ...

Apple releases its first mobile with support for 5G - iPhone 12

There has been a lot of talk about 5G in the last year. While Samsung, OnePlus, LG and Motorola have had their 5G mobiles out for a while, ...

The auction has ended for the 5G network

Now the long-awaited auction, regarding the frequencies in the 5G network, has ended and four players won the campaign. After four bidding rounds, the frequencies have now been all...