A VoIP phone is a phone that is connected to internet to call. Therefore it doesn’t pertain to the land line network and it’s not connected through the same cables as the old copper cables for calls that already exist. Another word is broadband telephony. A VoIP phone, which oftentimes is called SIP phone or a softphone, uses Voice Over IP (VoIP) to create and transfer sound over an IP network, such as internet. VoIP converts the sound into digital format which is then transferred over internet and converted into digital signals. A VoIP phone can be used to call with VoIP to all mobile phones, softphones or landline phones. This can either be a standard phone or a program based softphone.

A VoIP phone include features that an analog phone usually doesn’t support, this could include things like contact cards that make it easier to conduct contact lists whereas you don’t have to memorize names or phone numbers. The features are in essence the same as Skype with rich features that depend on IP networks.

Phones were traditionally always wired to a PBX that placed in the same location. The bulky hardware managed routing of all calls, but when VoIP came about, the features by far exceeded the traditional system. By sending calls over internet, or often called the cloud, no copper wires or bulky hardware is needed. You can keep your number and save costs for maintenance of a system that is always up to date.

VoIP phones usually come in two different forms; hard phones or softphones. By hard phones we mean traditional phones that stay put on a desk or in a conference room. Some of the features of hard phones include; regular calls, conference calls, voicemail, bluetooth, and speakerphone.

The softphone on the other hand is a virtual phone that works as a software or an app on the computer, tablet or on a phone. The basic features are similar to that of the hard phone but they also have a lot of advanced functionality that can be extremely useful. The softphone can also include integrations with various useful systems and 3-rd party applications. 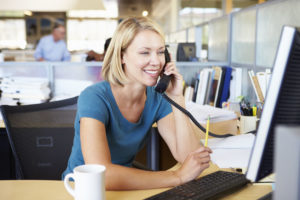 VoIP telephony or broadband telephony, is often offered in a bundle whereas broadband internet is included. However, this is two separate services and you can be removed if you choose. The benefit with broadband telephony is that you aren’t limited to one unit. You can answer on various different units.

Some carriers offer the ability to download an app or a program that enables you to answer in your computer, tablet or mobile. No matter how many units you have.

You can also transfer to your regular mobile number. Also, you can send SMS through this form of telephony.

The first phone calls over internet came about as early as the 1990s but it was first in the 2000s that they were regularly used for commercial purposes. Due to the release of Sweden’s telephony monopoly more carriers started to offer VoIP telephony in addition to their other internet services for consumers.

You can either use your computer, a special IP phone or a regular smartphone/tablet to make broadband calls. 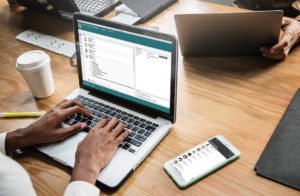 It’s also possible to transform a land line phone (that’s analogue) into an IP phone. The only thing you need is a special adapter. The adapter connects a phone plug to an ethernet plug so that the analogue phone can be connected to internet. Also, this doesn’t require any extra software.

The pros and cons

Starting the with pros, VoIP phones are truly great in providing mobility and scalability compared to traditional phones. If you decide to move office, you don’t need a bunch of new phone lines. Also, since the softphones can be used in apps, it can provide further mobility in clients and coworkers not being tied to their desk to perform the same work. Organizations can also vastly reduce costs by not having to implement bulky systems or a tech team for maintenance since it’s always up to date with a simple update.

The disadvantages are few but still pertain. VoIP has to have stable internet to work successfully. Also, they’re susceptible to insufficient bandwidth, and you may experience latency and thus delays. Lastly, if the power is out, so is your softphone…

For those who shill use fax you can send fax via internet. This is called FoIP, “fax over internet protocol”. You can send the fax from a computer and then use an analogue fax if you use an adapter.

The use of VoIP has grown incredibly much in recent years. This together with technical development, support from and through various business areas. We can state that it is not learning that will soon become more and more companies and individuals rely entirely on VoIP. But some things that may affect how we look at VoIP today, we have listed as the following points;