We take a lot of the technology we use for granted. We have our super light laptops and our smartphones that enable us to do our work where it suits us. We can choose, for ourselves, if we want to work in the office, from home or why not at that cozy café in town. We rarely think of all the technology, such as Wi-Fi and chargers, which help in this flexible working environment. And take something as obvious as the computer mouse, how it has evolved over decades from stiff wooden boxes to revolutionizing how we use our computers today.

Today we intend to give this, quite often neglected unit, a little extra love. This is the history of the computer mouse.

After the Second World War

The computer mouse, in the sense we are thinking of today, was not launched until the mid-80’s. But the fact is that the technology behind the computer mouse was invented far earlier. It was during the post-World War II period that the British navy produced what is usually called the trackball. The trackball was invented by Ralph Benjamin and used to track aircraft on a radar.

The Canadian navy was not late in adopting the technology for their own tracking equipment. They used a small bowling ball, for the track ball, because according to rumor, they did not receive as much funding for the project. 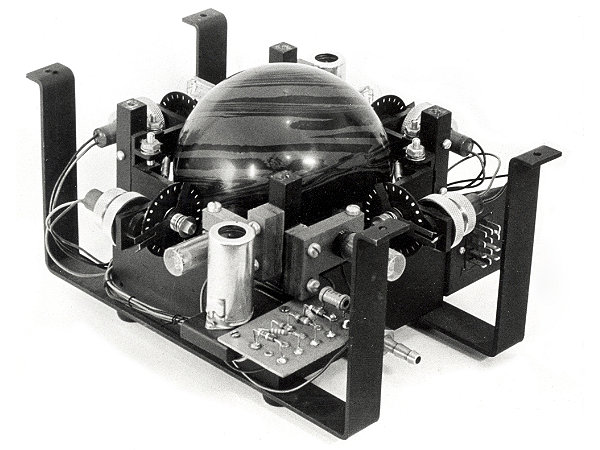 These early versions of trackballs were quite clumsy to use. The ball was on top of rotating metal plates which in turn lay in contact with cables. But since the British Army considered the invention a military secret, the track ball technology did not come into contact with the public until much later.

The first real mouse was invented in 1964 at Stanford University. Then it was in wood with a lone button on top. 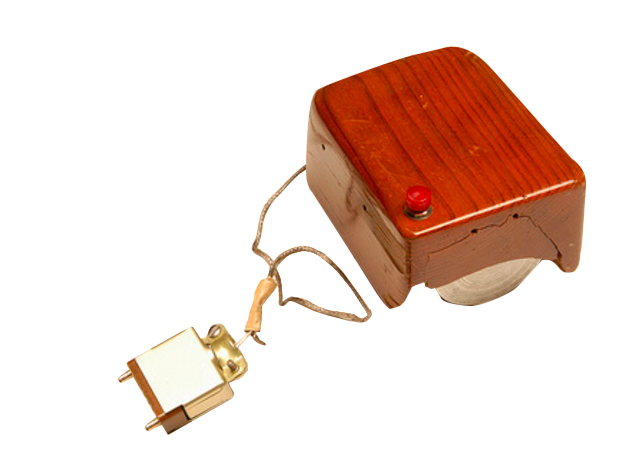 Today’s mice can be moved in any direction but the first mouse was far from as smooth. Instead, the mouse had two perpendicular wheels, they looked a bit like two pizza slicers, which allowed the user to move the mouse from side to side or forwards and backs. Therefore, the mouse had to move in a sick-sack pattern. Initially, the mouse was therefore called “X-Y position indicator for display system”. As you probably understand, this name was not super sexy for marketing purposes and the developers had to come up with a new name.

The reason the inventors later chose to call it mouse was because the cord that stuck out reminded the tail of a mouse. At first, the cord set in the direction of the arm but this changed quickly as they noticed that it was in the way of the wrist.

Xerox picked up the technology in 1973, when they developed a personal computer called Alto. This computer mouse was to be used with a graphical user interface (GUI) which created a completely new way of using the computer. Gone were the clumsy use of the control arrows and in came a faster and easier way to navigate around the screen.

As they worked on the development of Alto, Xerox also began to develop its own version of a mouse with a track ball, just as the British navy had done since World War II. The track ball worked in contact with axels which in turn sat attached to wheels with holes in them. As the mouse moved, the axels caused the wheel to spin, creating light rays that pulsed through the holes on the wheel. Sensors could then read the light pulses and in this way know in which direction the mouse was moving. 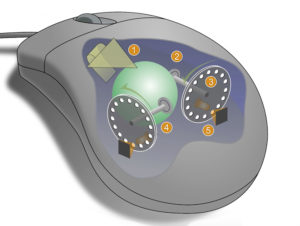 Collaboration between Apple and Xerox

Because Xerox worked primarily with companies, this invention was not particularly well known among private sector at first. Apple made an agreement with Xerox where they got shared ownership of Apple in exchange for using Xerox’s developed mouse. This way, the mouse, along with the Macintosh, was spread to the public in 1984.

The design that Xerox and Apple sold revolutionized the way we can interact with our computers. But that revolution haltered pretty quickly after that first wave. Besides the mouse becoming a little more ergonomic, and fit better in the hand than the first square mouse, the technology did not change much in the next 10 years.

It was not until 1996 that the first mouse with a scroll function appeared on the market. Later in the 90’s the optical mouse came along. Now you did not have to clean the computer mouse from various lint and dirt collected around the trackball. But the optical mouse was actually invented long before it was used. Already in the 1980’s there were an optical mouse, which worked by passing over specific mouse mats that felt the movement of the mouse. It was mainly production costs that needed to be lowered in order to be able to deliver this technology to the masses.

In 2004 the first laser mouse came along. It was Logitech who was first out with this, even more, precise mouse. Something that was really good for people who played a lot of computer games as it gave them an advantage when they were in the heat of battle. Gamers have since helped push the technology forward and computer mice today have better processors inside the mouse and now you can set the sensitivity on the computer mouse to better suit your own needs.

Important part of our everyday life

It was a long time since the first computer mouse was released with its wooden box and its stiff motion. But its intuitive use and simplicity of the invention have meant that the computer mouse has continued to be an important part of our use of the computer, despite new inventions such as voice control and touch screens.

Curious about how a touchscreen works? Then you will find exciting information in our blog post about touchscreens.

How does a touchscreen work
By Elin Gunnarsson
Content Manager
In a time of "it must happen now" it is of the utmost importance to have the right communication solutions.

4 responses to “The history of the computer mouse”

Consequences of inadequate customer service - and how to fix it!

Inadequate customer service is arguably the most detrimental to any business. A damaged reputation is hard to work around, even with the most exceptional marketing strategy. What c...

Today we take our mobiles for granted. You dial a number and directly your call will end up at the right place. Many of us probably don't think about our mobile calls more than tha...

Why are cell phones so expensive?

My current cell phone is more expensive than my first car was. Yes, okay it was a very crappy car, but still. An iPhone 11 can cost around SEK 8,000 and if you want a Samsung Galax...