We have been talking about VR for a long time, very long time. Already in 1962, an apparatus was created that transported you to Brooklyn’s streets, where you could experience the views, vibrations and even smells on a virtual motorcycle. The first head-worn VR headset was invented shortly thereafter, in 1968. For a long time, VR has not really had the impact it may have deserved. But now, with mobile devices with lots of capacity and the entry of 5G, maybe the R in VR will stand for “Return” instead of “Reality”. Because VR is back on our lips.

So what is VR? VR is an abbreviation of Virtual Reality. To express it in a fancy way, VR is a digital approximation of reality but still not the real reality. VR is a computer-generated version of one’s reality. If you put on a VR headset, it blocks your view of real reality and shows you another view instead. VR is designed to fool your senses. You could say VR helps you mentally teleport you somewhere else.

VR is often confused with AR. If you want to know more about what AR is, you can read our blog post about AR here.

How did VR come about?

We humans have long dreamed of being able to teleport us to another place. To, in a few seconds, be able to transport ourselves to another reality. It is probably that longing that has driven the work VR for such a long time. And early versions of VR have been around for a long time.

VR emerged as early as 1962, when the filmmaker Morton Heillig created what he called Sensorama. The sensors looked a bit like an arcade machine with a 3D screen, vibrating seat, stereo sound, a fan and even a device that produced odors. In Sensorama you could, for example, ride a motorcycle through Brooklyn while feeling the wheels vibrate towards the ground and feel the smell of bread as you drove past a bakery. Although this was a revolutionary technology of its time, Sensorama did not gain much popularity. 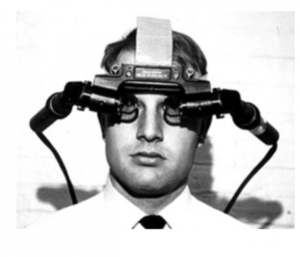 The Sword of Damocles

When it comes to VR screens, people often mention Ivan Sutherland, a researcher at MIT. In 1968 he created what came to be called The Sword Of Damocles. The device, The Sword of Damocles, is usually referred to as the world’s first VR headset. Even before Ivan started working on the headset, he was well known for his achievements in computer graphics and he himself called his VR headset “the ultimate screen”.

The views you got in The Sword of Damocles were not very realistic and the user interface was quite primitive. When using The Sword of Damocles you needed to have your head firmly attached to the unit as it read the movement of the head. The rather startling appearance of the mechanism was what inspired its name.

VR – from retro to high tech

The continued work on VR, during the 60s and 70s, was driven, in many ways, by the American army when building vehicle simulators. With the work, that Nasa and researchers at The University of Utah did, along with advances in computer graphics, VR began to gain momentum in the 1980s.

In 1985, Nasa created The virtual environment work station. This became the next step in VR and the device consisted of two LCD screens, a wide-angle stereo and a motorcycle helmet. Now the concept,Virtual Reality, which we use today, was coined by Jaron Lanier. Lanier helped design the gloves that belonged to Nasa’s creation.

When you talk about VR, you can’t help but mention Randy Pausch. His last lecture “Achieving your Childhood dreams”, which he held before he died, is inspirational, fun and sad. And of course it’s about VR. Randy worked with Disney’s early VR projects and created the Building Virtual Worlds course that inspired many students to continue to advance VR technology.

VR in the homes

In the 90s, video games with VR began to pop up. It started with special arcade machines and in 1991 the company The Virtuality Group started dropping VR machines for home use. But VR did not received a lot of praise from consumers. And Virtual Boy, launched by Nintendo in 1995, became a huge flop. Critics said it was too expensive, the games had poor quality and the 3D effect was unimpressive.

Unfortunately, VR died out a bit after that. VR had not lived up to the hopes of neither manufacturers nor consumers, and the concept fell into oblivion.

But suddenly something happened. In 2012, the company Oculus was started, they created a headset that breathed life into VR again. The idea behind Oculus was surprisingly simple. Instead of having two different screens, one for each eye, Oculus had two lenses in front of one screen, creating the illusion of depth.

The future in VR

In recent years, VR has become increasingly widespread. Finally, VR starts to live up to the high expectations that were laid on the experience right from the start.

Today, VR is something we are used to talk about. However, many people believe that VR only has to do with games and leisure. But it is far from the truth. VR will be able to help change the way we work and learn in the future. Everything from environmental organizations, meetings with celebrities to accountants can use VR to improve their organizations. The use has increased with gamers, architects, brokers, teachers and even astronauts.

VR helps us add one more layer to our experience. A regular article in a newspaper about a concert can give you a limited picture of what it was like. A picture can then add a bit more. But through VR, we can get closer to the feeling of what it was like being there. Words can explain, and they say that a picture can say a 1000 words. then just imagine how much can VR then give us?

And VR is constantly evolving. With more real-world experiences and stronger technology in the background, VR can open up new worlds for us humans. Through gamification, VR can make it more fun for children to learn new things, or give the history lesson a whole new dimension by letting children visit Pompeii or see what a medieval settlement might look like.

The possibilities for VR are enormous, both in our leisure time and in our work.

What is best - the internet via TV cable or ADSL?

While many are ecstatic about ...

What is IVR and why is it important for companies?

IVR or Interactive Voice Response is a tool companies can use to collect data and route calls, without even having to answer the phone. Of course you'll have to pick up the phone a...

The difference between a Call Center and a Contact Center

You may have heard of both concepts before, Call Center and Contact Center. These are two completely different services but many often confuse the concepts, which is not so strange...